Last night's Andrew McCabe interview on 60 Minutes had Trump so rattled that he tweeted this ahead of it: 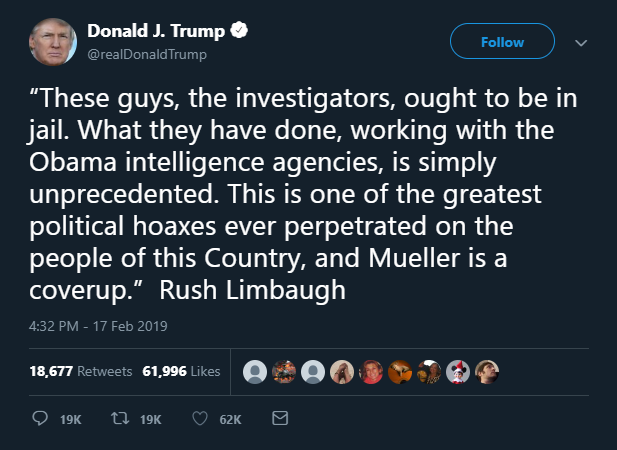 Again, this is the man in the Oval Office retweeting Rush Limbaugh's call to jail Robert Mueller as well as anyone investigating him.  That's a lot of people this tinpot dictator wants jailed, and it's because McCabe dropped the hammer on him last night in his interview with Scott Pelley.

Scott Pelley: How long was it after that that you decided to start the obstruction of justice and counterintelligence investigations involving the president?

Andrew McCabe: I think the next day, I met with the team investigating the Russia cases. And I asked the team to go back and conduct an assessment to determine where are we with these efforts and what steps do we need to take going forward. I was very concerned that I was able to put the Russia case on absolutely solid ground in an indelible fashion that were I removed quickly or reassigned or fired that the case could not be closed or vanish in the night without a trace.

Scott Pelley: —That those investigations had begun because you feared that they would be made to go away.

McCabe says that the basis for both investigations was in Mr. Trump's own statements. First, Mr. Trump had asked FBI Director Comey to drop the investigation of National Security Adviser Michael Flynn, who has since pleaded guilty to lying to the FBI about his Russian contacts. Then, to justify firing Comey, Mr. Trump asked his deputy attorney general, Rod Rosenstein, to write a memo listing the reasons Comey had to go. And according to McCabe, Mr. Trump made a request for that memo that came as a surprise.

Andrew McCabe: Rod was concerned by his interactions with the president, who seemed to be very focused on firing the director and saying things like, "Make sure you put Russia in your memo." That concerned Rod in the same way that it concerned me and the FBI investigators on the Russia case.

If Deputy Attorney General Rosenstein listed the Russia investigation in his memo to the White House, it could look like he was obstructing the Russia probe by suggesting Comey's firing. And by implication, it would give the president cover.

Scott Pelley: He didn't wanna put Russia in his memo.

Andrew McCabe: He did not. He explained to the president that he did not need Russia in his memo. And the president responded, "I understand that, I am asking you to put Russia in the memo anyway."

When the memo justifying Comey's firing was made public, Russia was not in it. But, Mr. Trump made the connection anyway, telling NBC, then, Russian diplomats that the Russian investigation was among the reasons he fired Comey.

Andrew McCabe: There were a number of things that caused us to believe that we had adequate predication or adequate reason and facts, to open the investigation. The president had been speaking in a derogatory way about our investigative efforts for weeks, describing it as a witch hunt…

President Trump on Feb. 16, 2017: Russia is a ruse. I have nothing to do with Russia. Haven't made a phone call to Russia in years.

Andrew McCabe: ...publicly undermining the effort of the investigation. The president had gone to Jim Comey and specifically asked him to discontinue the investigation of Mike Flynn which was a part of our Russia case. The president, then, fired the director. In the firing of the director, the president specifically asked Rod Rosenstein to write the memo justifying the firing and told Rod to include Russia in the memo. Rod, of course, did not do that. That was on the president's mind. Then, the president made those public comments that you've referenced both on NBC and to the Russians which was captured in the Oval Office. Put together, these circumstances were articulable facts that indicated that a crime may have been committed. The president may have been engaged in obstruction of justice in the firing of Jim Comey.

Scott Pelley: What was it specifically that caused you to launch the counterintelligence investigation?

Andrew McCabe: It's many of those same concerns that cause us to be concerned about a national security threat. And the idea is, if the president committed obstruction of justice, fired the director of the of the FBI to negatively impact or to shut down our investigation of Russia's malign activity and possibly in support of his campaign, as a counterintelligence investigator you have to ask yourself, "Why would a president of the United States do that?" So all those same sorts of facts cause us to wonder is there an inappropriate relationship, a connection between this president and our most fearsome enemy, the government of Russia?

Scott Pelley: Are you saying that the president is in league with the Russians?


And remember, for this, McCabe was run out of the FBI, the same organization that cleared his information in his book.

The obstruction of justice happened, the only question is whether not it's actually prosecuted...
Posted by Zandar Permalink 10:00:00 AM