Last Call For It's All About Revenge Now, Con't

Meanwhile, House GOP Intel Committee ranking member Devin Nunes is over at FOX News, openly calling for Mueller and the those who dared to investigate Donald Trump's Russia ties to be jailed.  Screenshot of the story, won't give them the pleasure of a link. 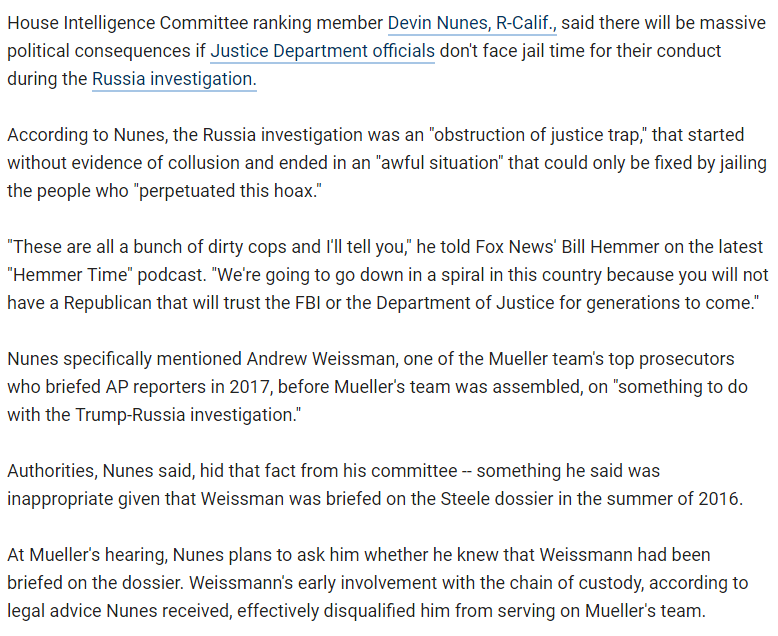 Mueller's team were all "dirty cops" according to Nunes, and if Attorney General Barr doesn't send them to jail, no Republican will trust him again.

This is an outright threat in response to the Dems calling a vote for Barr to face contempt of Congress on Tuesday.

House Democrats will vote next week on criminal contempt charges against Attorney General William Barr and Commerce Secretary Wilbur Ross for failing to comply with a congressional subpoena over the 2020 census, Speaker Nancy Pelosi announced Thursday.

The vote — the second time a sitting attorney general would be found in criminal contempt by the House — has little real-world impact as Barr almost certainly won't face criminal charges from the Justice Department over efforts to include a citizenship question.

But the symbolic value would be high, as Democrats have already approved a civil contempt resolution against Barr for failing to respond to a subpoena to testify about former special counsel Robert Mueller's report on Russia election interference. Mueller will testify before the House Judiciary and Intelligence panels next Wednesday.

While the Supreme Court ruled the administration cannot include the citizenship question on the census, President Donald Trump is still trying to do so by executive order, which will lead to more legal battles.


Robert Mueller is expected to testify on July 24th.  We'll see if that actually happens.