Return Of The Blue Wave, Con't

The latest high-profile Republican retirement is the lone black member of the GOP in the House, Texas Rep. Will Hurd.


Rep. Will Hurd, the lone black Republican in the House and the rare GOP lawmaker to criticize President Trump at times, will not seek reelection, he told The Washington Post.

Hurd’s retirement is the third by a Texas Republican in the past week and the ninth by a party incumbent, dealing a blow to GOP efforts to regain control of the House in next year’s election.

Hurd barely held the seat last year and Trump lost the congressional district, which covers more than 58,000 square miles between San Antonio and El Paso along the Mexican border, by four percentage points in 2016.

In an interview Thursday with The Post, Hurd criticized Trump’s racist tweets last month in which the president said four Democratic minority congresswomen should “go back and help fix the totally broken and crime infested places from which they came.” Three of the women are from the United States; a fourth, Rep. Ilhan Omar (Minn.), is a Somali refu­gee who became a U.S. citizen as a teenager.

But Hurd also repeated his earlier pledge to vote for Trump if he’s the Republican nominee in 2020. He said Hispanics, African Americans and other groups would be receptive to conservative themes if they weren’t drowned in racially charged rhetoric.

More recently, Trump targeted House Oversight Committee Chairman Elijah E. Cummings (D-Md.) and his city of Baltimore, tweeting that “no human being would want to live” in the “disgusting, rat and rodent infested” city. The remarks prompted widespread accusations of racism, which Trump has denied.


You read that right, Hurd is the third Texas House Republican to retire this week.

The defections are now threatening to become a deluge.  The last remaining Republicans with a shred of dignity left are fleeing the GOP in droves.

Why is Hurd out?  Sick of the GOP's racism, perhaps, but Hurd says he plans to vote for Trump in 2020 and will almost certainly continue to vote with Trump in the House where has has done so 81.3% of the time. 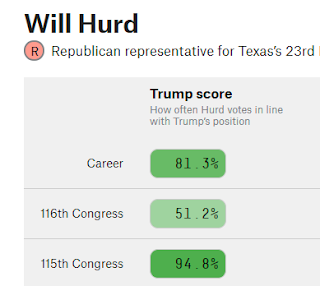 Hurd wants out and into the private sector, the revolving door, because he has calculated that he can't win. He's already advertising his availability as a China expert, border consultant, and cybersecurity czar.

We are in a geopolitical competition with China to have the world’s most important economy. There is a global race to be the leader in artificial intelligence, because whoever dominates AI will rule the world. We face growing cyberattacks every day. Extreme poverty, lack of economic opportunity and violence in Central America is placing unbearable pressure on our borders. While Congress has a role in these issues, so does the private sector and civil society.


But here's the bigger picture that Hurd's retirement reveals, first, that an incumbent who never won any of his three elections by breaking 50% is done, and two:

Texas is now in play, ladies and gentlemen.
Posted by Zandar Permalink 10:00:00 AM