This is currently on the Opinion page of the NY Times: 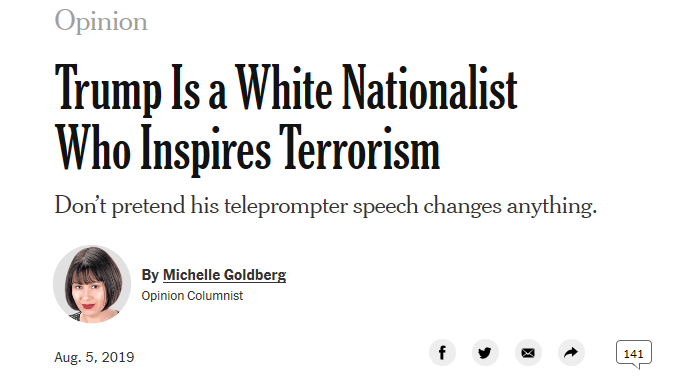 Trump has to get the needle off of domestic politics, so he's gone ballistic on the foreign entanglements.  Friday's threat of new tariffs on the remaining $300 billion or so in Chinese imports, along with Beijing blaming the US for Hong Kong protests, has become the final straw.

And like millions of Americans witnessed this weekend, Donald Trump is a bully and fundamentally weak leader and the Chinese government has decided that the best way to deal with Trump is to punch the bully in the mouth until he's forced to leave.  Trump's trade war with Beijing has now turned Pyrrhic.


China confirmed reports that it was pulling out of U.S. agriculture as a weapon in the ongoing trade war.

A spokesperson for the Chinese Ministry of Commerce said Chinese companies have stopped purchasing U.S. agricultural products in response to President Trump’s new 10% tariffs on $300 billion of Chinese goods.

“This is a serious violation of the meeting between the heads of state of China and the United States,” the Minister of Commerce said in a statement Monday that was translated via Google.

The department also said it would “not rule out” tariffs on newly purchased agricultural goods after August 3.

China is one of the largest buyers of U.S. agriculture. Bloomberg News reported that Beijing may stop importing them completely in response to new tariffs by the United States. According to reports by Chinese State media, it would also consider slapping tariffs on U.S. agricultural products that it already bought.

Those stories helped exacerbate fears on Wall Street pushing stocks to their worst day of the year. Now that China has confirmed the reports, it could add to pressure on equities. Stock futures fell Monday, implying a 480 point drop Tuesday.

U.S. farming has been a hot-button issue in the ongoing trade war. The president said that he had secured large quantities of agricultural purchases when he met with President Xi Jinping at the G-20 summit in June. Trump later accused China of not following through, leading him to announce on Thursday 10% tariffs on the remaining $300 billion in Chinese imports.


The Dow plunged nearly 800 points on Monday.  Futures show today will be just as bad, as the Trump regime's response is equally scorched Earth.

The U.S. Treasury has just taken the extraordinary step of designating China as a currency manipulator, something no administration has done since the days of Bill Clinton.

With the action, the trade war between the U.S. and China has entered a new phase that will likely see both countries stepping up both their rhetoric and actions in the trade dispute that has now dragged on for over a year.

As a result of the ongoing hostilities between the U.S. government and China, the flood of investment dollars that once came from Chinese technology companies and investors into U.S. technology companies has slowed. Acquisitions and investments made by Chinese companies have been unwound over concerns from the Committee of Foreign Investments in the U.S. and tariffs slapped on Chinese imports have hit U.S. stock prices (including in the technology sector).

The news of Treasury’s move comes less than 24 hours after the Chinese government announced a complete halt on U.S. agricultural imports. More significantly, the Bank of China has let the country’s currency slide in value against the U.S. dollar to above the seven-to-one figure that was considered a line-in-the-sand for trade.

Given the escalation, economists’ fears that global markets could slip into a recession within the next nine months are more likely to be realized, according to reports from Morgan Stanley, quoted by CNBC.

“We take its literal message of planned tariffs quite seriously. There’s a pattern of responding to insufficient negotiation progress with escalation,” Morgan Stanley said in an analyst report.


But trade wars are easy to win, right?

Meanwhile, with China turning into a conflagration, oil has taken a bath.  That means Trump has to cause oil prices to spike again and he's found his solution.  Late last night the Trump regime declared total economic sanctions on one of China's biggest trading partners: Venezuela and the "illegitimate" government of President Nicolas Maduro.

President Donald Trump on Monday announced the US would expand its existing sanctions against Venezuela with an executive order to impose a total economic embargo against the country.
The embargo freezes assets of the government of Venezuela and associated entities and prohibits economic transactions with it, unless specifically exempted. Exemptions include official business of the federal government and transactions related to the provision of humanitarian aid.

The executive order marks an escalation from the already expansive US measures against the Venezuelan government since the start of the country's chaotic political and economic crisis earlier this year.
In a letter to Congress outlining the action Monday night, Trump said, "I have determined that it is necessary to block the property of the Government of Venezuela in light of the continued usurpation of power by the illegitimate Nicolas Maduro regime, as well as the regime's human rights abuses, arbitrary arrest and detention of Venezuelan citizens, curtailment of free press, and ongoing attempts to undermine Interim President Juan Guaido of Venezuela and the democratically-elected Venezuelan National Assembly."

While several nations -- including China and Russia -- have supported Maduro in the wake of the election, Trump has been a vocal champion for Guaido.

"In its role as the only legitimate branch of government duly elected by the Venezuelan people, the National Assembly invoked the country's constitution to declare Nicolas Maduro illegitimate, and the office of the presidency therefore vacant. The people of Venezuela have courageously spoken out against Maduro and his regime and demanded freedom and the rule of law," Trump said early this year in a statement recognizing Guaido as interim president.


In all seriousness, it won't take much to topple the US economy into a 2008-style free-for-all that will end up crushing the country.  That event may have just happened.

Stay tuned.  Trump's economic war is about to turn hot.
Posted by Zandar Permalink 10:00:00 AM