At C&L Karoli calls the House GOP hostage-taking on the debt ceiling what it is:  treasonous. 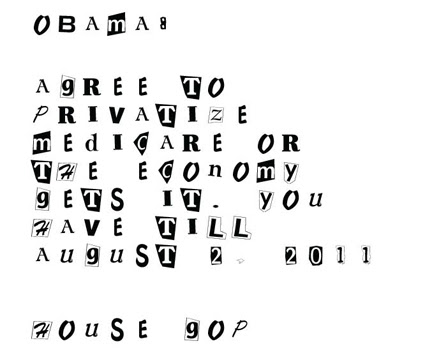 I have had just about enough of this nonsense. Forcing a sovereign debt crisis for cynical political gain is not just unpatriotic. It's treasonous. This is not a political football, it's serious business and the Very Serious People inside the Beltway had better come to their damn senses and figure that out. You don't hold hostages in this situation. I realize Republicans have gotten their way by stomping their tiny little hooves and bleating that they must, simply must, have concessions before they will do the right thing for this country, but the debt ceiling is not in that category.

It's a little like telling the Visa folks that you'll refuse to pay your balance until they lower your interest rate. Good luck with that. Same thing here, and it's time for this idiots and asshats in Congress to start acting like Americans first and Republicans second.

Which is exactly why the Village is in on it, trying to convince us that defaulting would be "good in the long run" because it would force trillions in spending cuts, cuts that wouldn't help the deficit one bit because they were strangle what growth we have and GOP just wants more tax cuts for the wealthy anyway, they could give a damn about deficits.

The only way to turn the Republican treason away from a political loss for the President is for that ransom note to be circulated far and wide, to simplify the message and boil it down to this: Republicans are holding the US credit rating hostage until seniors' health care is cut, and cut deeply. Forget throwing Grandma off the cliff; they want to throw the whole damn country down it.

Agreed.  Threatening to destroy the country for political reasons is the modern Republican definition of terrorism, is it not?
Posted by Zandar Permalink 10:18:00 PM